My purpose in this article is to explain Gartner Research’s Hype Cycle and relate it to the Technology Adoption Lifecycle popularized by Geoffrey Moore’s book, “Crossing the Chasm.”  These two models can be used together to provide a combined picture of market expectations and expected technology adoption rates, but people often get the timeframes and takeaways wrong. So if you’re involved in technology as an engineer, marketer or manager, read on!

For the purposes of this discussion, I reference Gartner Research’s 1 August 2012 report by analyst Jim Tully titled, “Hype Cycle for Semiconductors and Electronics Technologies, 2012”, in addition to Moore’s book. I also use network-on-chip (NoC) as a technology example and Arteris as a company example because I am most familiar with these and many people in the semiconductor industry are already familiar with these, too. [Full disclosure: I love working at Arteris and I love NoC technology!]

In Jim Tully’s semiconductor hype cycle report, he showed that NoC technology will be leaving the “Slope of Enlightenment” to reach the “Plateau of Productivity” soon. (See Figure 1). To support this position he stated that, “The investments that both ARM and Qualcomm have made in NoC company Arteris further point to increased interest in this technology,” and advised, “All enterprises involved in advanced SoC design should seriously evaluate NoC offerings.” But what is the “Slope of Enlightenment” and “Plateau of Productivity”? And what use is the Hype Cycle?

What is the Gartner Hype Cycle?

Unlike the Technology Adoption Lifecycle or “Crossing the Chasm” model with which you may already be familiar, Gartner created the Hype Cycle to measure and predict expectations regarding new technologies. In other words, Gartner found that for any new technology, peoples’ reactions to it follow the same pattern, no matter whether the technology is the Internet, through silicon via, NoC or even fire and the wheel. The key here is people. By understanding the reactions of people to new technologies, we can better predict the adoption of new technologies and make smarter product planning (and even personal purchasing) decisions.

The 5 Stages of the Gartner Hype Cycle

Figure 2 shows technology milestones that occur in each of Gartner’s hype cycle stages. 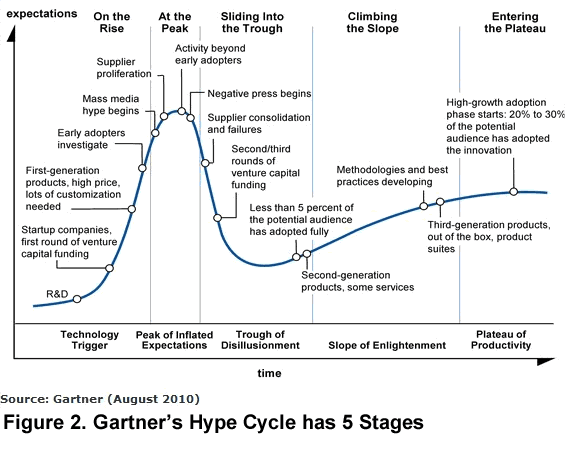 A key point to understand is that the time it takes for a technology to travel along the hype cycle is non-linear. In other words, the technology moves through the cycle in fits and starts. 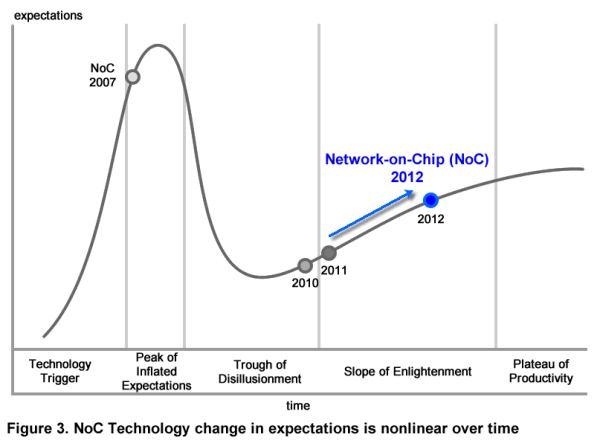 Using the Gartner Hype Cycle and Chasm Model Together

I have seen many people try to relate the Gartner Hype Cycle to Moore’s Technology Adoption Lifecycle and get it wrong. The issue is that many people simply superimpose the two charts over each other, without realizing that the Gartner Hype Cycle is only valid for the early stages of the Technology Adoption Lifecycle. More specifically, the Hype Cycle tracks perceptions of a technology to a point within the Early Majority phase of the lifecycle, which includes the “chasm” that Geoffrey Moore so eloquently details in his book.

At the left side of the chasm, the technology’s customers and users are change agents, looking to get a jump on the competition. But on the right side, the customers and users desire productivity improvements for their current operations. This change in technology users and customers through the chasm is what accounts for the wild swings in expectations shown in the Gartner Hype Cycle!

Accuracy of the Hype Cycle and Chasm Model

How accurately does the Gartner Hype Cycle track a technology relative to the Technology Adoption Lifecycle? As an example, I’ve created Figure 4 which shows the NoC technology hype cycle chart over the technology adoption lifecycle chart. 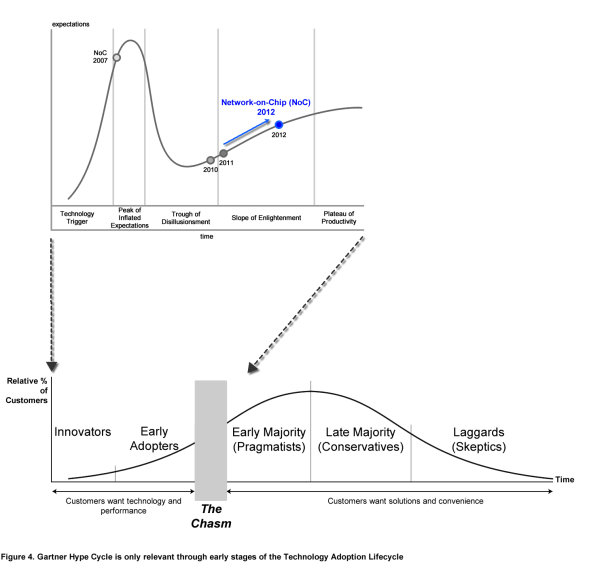 From this chart you could say that NoC technology has crossed the chasm and is on its way to fast adoption and hyper growth. If you used Arteris as a proxy for NoC technology (because it is a pure-play NoC technology company), you would have other evidence that supports this, such as Arteris’  767% revenue growth between 2008 and 2011, Arteris’ inclusion in the 2012 Inc. 500 list, and a multitude of new customer announcements in 2011 and 2012.

So as a descriptive or backwards looking model, the Gartner Hype Cycle seems to be valid.

Predictive Use of the Hype Cycle and Technology Adoption Lifecycle

What is tougher to answer is whether the hype cycle is useful as a normative or predictive model.

The reality is that there are technologies that start the hype cycle but never cross the chasm and become successful. However, as a technology makes it to the Slope of Enlightenment and the Plateau of Productivity, its probability of market success increases beyond what it was in the earlier hype cycle phases. Therefore, one could feel more comfortable using data from the Slope of Enlightenment to the Plateau of Productivity help make investment or product planning decisions. However, technologies that appear in earlier hype cycle stages should also be researched for future applicability to project plans and investments.

Although the Gartner Hype Cycle and the Technology Adoption Lifecycle / Crossing the Chasm model measure different phenomena, they are related in time and by human beings’ reactions to the introduction of new technologies. The examples used above show how the two models succeed as descriptive models as long as the time frames mapped between them are well understood, and suggest that one could use these models to help make investment or product planning decisions.