IP Subsystems Are Nothing New

I’ve been hearing the term “IP subsystem” lately, and it seems to be the latest newfangled buzz word in the SoC semiconductor and IP industry, second only to “virtualization.” Much of the context for this growing interest in IP subsystems has been inspired from the work of Rich Wawrzyniak in his Semico Research report, “IP S 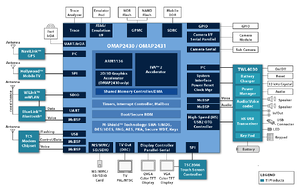 Rich was kind enough to send me the table of contents and an extract of the executive summary of this report, and I will say that I agree with the conclusion: Instead of integrating discrete IP blocks, “SoC designers are now looking to move up a layer of abstraction to design with system-level functionality to reduce the effort and cost associated with complex SoC designs today.”

And Rich also states that, “the concept of an IP subsystem is not a new one.”

However, I am confused about why people think this is new, and whether our definitions of an IP subsystem go far enough.

I’m totally biased based on my experiences working at Texas Instruments and ARC: IP subsystems are not new.

But wait. TI is a silicon vendor, not an IP vendor. When has there been an instance of an IP vendor offering an IP subsystem?

What should be in an IP subsystem?

Rich lists three features that are part of an IP subsystem, and I agree with all of them. Paraphrasing Rich, IP subsystems:

As an interconnect IP provider, I especially like No. 3.

OK, I apologize for my homage to the worst movie ever.

Seriously, as I look at this list I see one missing item and a second potential missing one.

First, software is missing from the definition. Look back at my descriptions of TI’s OMAP 2 IVA 2 and ARC’s ARCsound: They both included a software stack leading all the way up to the application level. That is because as development times for consumer electronics have shrunk, the CE device vendors have put the screws on semiconductor vendors, forcing them to supply enabling software for their silicon in addition to the chips themselves.

Things like this roll downhill through the value chain, so an IP provider hoping to sell an IP subsystem had better provide a complete software stack to the semiconductor maker.

I don’t know enough to answer this question. But I do know that there is a trend toward offering IP subsystems, and that software will be a key component of that subsystem.