For all the work our industry does to implement sophisticated power management and conservation features in our chips and software, I was dismayed (and a little appalled) to read Saturday’s New York Times article, “Atop TV Sets, a Power Drain That Runs Nonstop.” 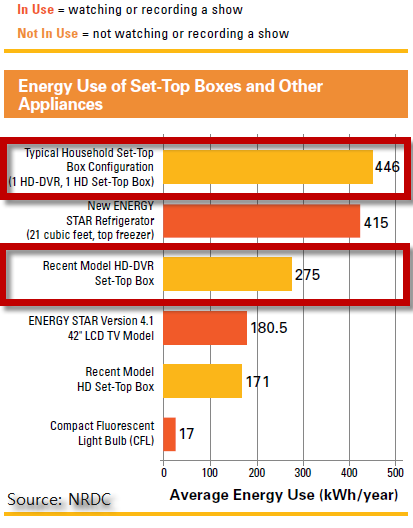 Our industry’s dirty little secret is out, with help from the National Resources Defense Council (NRDC) and The New York Times: For all the work we put into our products to provide advanced power management features, consumer electronics device manufacturers rarely implement them.

This was news to me. Unfortunately, it is not news to the NRDC.

I also found a more detailed 2005 NRDC report with the same conclusions. In other words, power consumption of STBs has not changed in six years!

Being an engineer, I went online to research my own Comcast Motorola DCT6412’s power consumption. My research on the DCT6412 did not give me a warm fuzzy. From AVSforum I learned my DCT6412 STB box is so darn hot all the time because the hard drive spins continuously and the tuners stay on whatever the last channel was, even when the box is “off.” While sucking 55W per hour, 24/7, at $0.12233/kilowatt hour in California, I’m paying a little under $5/month just to power this single cable box. The NRDC estimates that this hidden, aggregate tax on U.S. consumers is $2 Billion per year.

Not lazy, just no incentive

Why don’t device manufacturers use the advanced power management features in our silicon and software?
The New York Times article quotes Alan Meier, a Lawrence Berkeley National Laboratory, saying of the U.S. cable and satellite TV industries, “I don’t want to use the word ‘lazy,’ but they have had different priorities, and saving energy is not one of them.”

Incentives create priorities, and that’s the problem. For me to want to save money, and ultimately energy, with regards to my vampire-from-hell STB, I need to know how much money it is costing me. If we assume the laws of classical economics still hold, with that information I will then contact Comcast for other cable box options. Comcast will then order more efficient STBs from Motorola and my initial price signal will cause reduced demand for vampire STBs, and then cause increased supply and lower prices for efficient STBs.

A tax on my ignorance

At least that’s what an MIT economics professor would say. The reality is that most people aren’t geeks like me, so they won’t know how much energy their electronic devices needlessly consume. Therefore there is no price signal traveling up the consumer electronics value chain. In effect, each of us pays an ignorance tax to the power company, and we use more resources than we need to.

The fix is in

The U.S. government has stricter ENERGY STAR guidance for STBs in 2013, and conservationists are always pushing for higher energy taxes so that consumers have the motivation to act on price signals and conserve energy. But I’m not holding my breath. I just ordered a Kill A Watt to find out what other vampires are lurking in my house.