That was the underlying question behind a trio of presentations given at yesterday’s Gartner Semiconductor Briefing at in San Jose. Three Gartner analysts outlined a path forward for our industry to innovate its way out of the morass that has become the digital TV market. 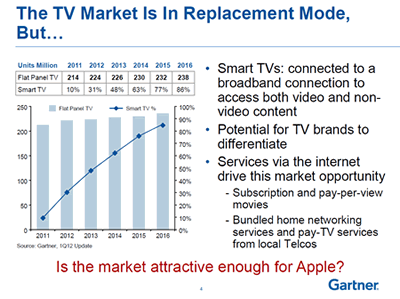 Alfonso Velosa was the first analyst to present about digital TV yesterday, with a presentation titled, “What Apple Digital TV Rumors Predict for the Future of Smart TV.” Abid Ghubil followed with his presentation, “How Touch, Voice and Gesture Will Change the Way You Interact with Your TV.” Senior Research Analyst Michele Reitz then delivered her recommendations to the semiconductor industry audience during her presentation, “DTV Improved User Experience & Its Impact on Semiconductor Roadmaps.”

Why is digital TV important to us?

First, it’s a big market for SoCs, and the growth is projected to explode in the next five years. 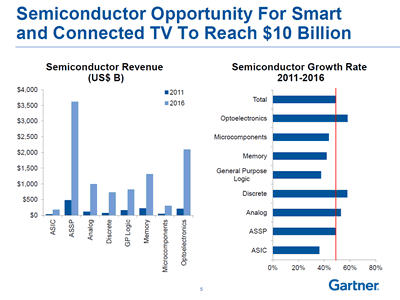 Second, the DTV market has suffered a bloodbath in the past year with major TV vendors like Sony, Hitachi, Toshiba and Panasonic losing billions of dollars and their semiconductor suppliers like Broadcom and Trident choosing to exit the market. Through the Darwinian machinations of Adam Smith’s invisible hand, a profitable way forward for this market must emerge eventually.

And finally, and more parochially, we’re all DTV consumers who are likely frustrated at how DTV makers have chosen to “innovate” with relatively valueless “commodity” features such as refresh rate, 3D and pixel count while avoiding the real issue for consumers, which is how to control a DTV (and the STB, AV receiver, Blu-ray player, etc.) from across the room to take advantage of the new content it can now offer.*

For those of us in the semiconductor industry, the combined presentations from all three analysts point us to the two largest growth markets for DTVs SoCs: the “application processor,” which has similar functionality to a mobile phone applications processor, and the “optical gesture processor,” such as those created by Primesense for the Microsoft Xbox’s Kinect controller. They also point to the need for semiconductor vendors to offer a complete solution all the way from firmware up through application-level software, or to partner with ecosystem vendors to jointly create the solution.

The big picture message I received from these Gartner presentations is that the traditional television supply chain has failed to sufficiently innovate in DTV to allow consumers to take advantage of all the content and features that DTV promises.

There’s a burning need to develop a new way to control DTVs from the couch, and the company that does this could be the next Apple.

Or it could be Apple.

* Just to give you an indication of my personal frustration with controlling my DTV/STB/AV receiver setup, I have given up on two Harmony remotes over the past 3 years and still use my hacked JP-1 Radio Shack 15-1994 remote control that I bought a decade ago. You can learn how to hack your JP-1 compatible UEI remote here. The remote that comes with your cable STB is most likely JP-1 compatible. The bad news is I know more about IR protocols and EEPROM coding than any aeronautical engineering major ever should. The good news is my remote controls my system exactly the way I like. My next project is to program my trusty 15-1994 to control my new Apple TV!

Slides are from Gartner Semiconductor Briefing San Jose, 22 May 2012. Presentations referenced in this article are: