Arteris network on chip (NoC) technology is the most flexible interconnect technology because one can use any socket protocol, any architecture, and any combination of clock, voltage and power domains. 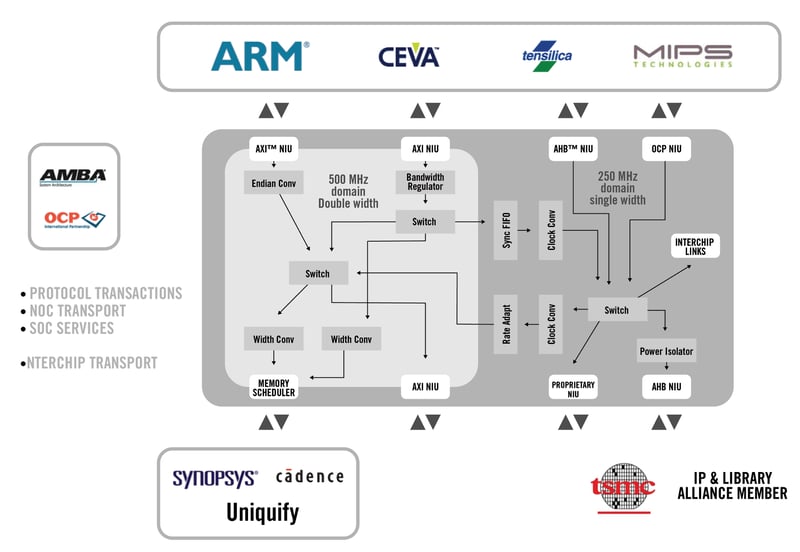 In traditional bus and crossbar interconnects, changing an IP block means not only dealing with a different transaction protocol, but also making changes to the path widths and physical bus topology to accommodate the new IP. At a minimum, bridging is usually required. In the worst case, changing IP blocks leads to back-end timing and physical placement issues that delay the release of what was promised as a “simple derivative.”

In comparison, changing an IP block on a NoC interconnect only requires changing the configuration of the network interface unit (NIU) to accommodate the protocol and bit width changes for that IP block. The NoC interconnect’s packet-based transport allows mixing data widths and clock rates.

Protocol conversion, packetization and serialization are performed in the network interface units (NIU), which are physically located close to each NIU’s corresponding IP block and do not create placement and routing issues.

This is in direct contrast to a traditional bus or crossbar approach where the interconnect at the physical stage is a monolithic switch or series of switches that must be squeezed between existing IP blocks, along with the commensurate tangle of congested wires.

FlexNoC’s power management features and low latency helped us create the lowest-power IoT communication devices in the world. Just as important were the business benefits: Using FlexNoC allowed us to create a small set of digital logic SoC dies that serve as the brains of more than one hundred different products, each customized for its particular market.

FlexNoC’s flexibility and automation, combined with our implementation of software-programmable on-chip firewalls and power disconnect features, enabled us to produce an entire product line with a minimal number of digital logic components.

Arteris was invited to Davos, Switzerland, to receive the World Economic Forum Technology Pioneer award in 2008.