The TI OMAP4430 is a very sophisticated mobile application processor system on chip (SoC) with dual ARM Cortex-A9 CPU cores, an Imagination Technologies POWERVR SGX540 GPU and the TI-created IVA 3 image and video accelerator and image signal processor. These semiconductor IP blocks are linked together by a network on chip interconnect from Arteris. The BlackBerry Playbook takes advantage of this multicore goodness while limiting power consumption by using RIM's BlackBerry Tablet OS, based on the multicore QNX operating system.

The BlackBerry PlayBook is the first tablet with a TI OMAP 4 processor. The OMAP4430 internals are publicly 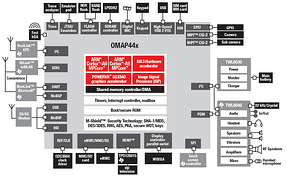 Compared to the Apple iPad, the RIM BlackBerry PlayBook has a smaller 7 inch 1024x600 LCD screen and weighs less than one pound, both for better portability. There's a really cool video on BlackBerry's blog showing how fast the PlayBook tablet is compared to the iPad. What will be really interesting to see is how battery life compares while these devices are connected to the cellular networks.

Rumor has it that Sprint will be the first carrier to offer the BlackBerry PlayBook, starting in April. Beta versions of the PlayBook should be available for business customers in February. Some retailers are taking pre-orders now. I'll buy one as soon as I can and report out.

In the meantime, be sure to check out the RIM BlackBerry PlayBook OMAP 4430 processor here.